When its time to buy a car, the first thing on most people’s mind is to go for the newest model. They come with all the bells and whistles, plus a considerable price tag to match.

But, is it worth it, or will you end up in debt? Here is an in-depth look at the differences between new and used cars, and how to avoid ruining your financial life. The adage that cars lose thousands, in value, immediately they leave the dealership is still valid, and it happens to both new and used autos. But this depreciation plummets faster during the first few years of the car’s life. For example, a Porsche that sold for $50000 ten years ago, could be yours for only $25000 today.

Used cars, on the other hand, lose value slowly. So, if you decide to sell the vehicle, the difference between the buying and selling price will not be huge. But you can take advantage of online reviews and forums to avoid car brands with bad resell values.

Getting an auto loan for a new car is relatively easy and cheaper, compared to getting one for a used car; and it’s easy to see why. New vehicles come with a known collateral value, (the car), backed by a warranty and no history. Plus, past experiences show that new car buyers are likely to repay their auto loans in full.

Used car financing, though, is quite tricky. There’s no fixed collateral value, and used cars are generally prone to serious breakdowns. Because of these risks, lenders tend to charge higher interest on used cars, but the actual amount depends on your preferred creditor.

Some dealers add overpriced, useless features on new vehicles for a profit. Things such as painted stripes, protective film, and rust coating inflate the final price of the car. Yet, you can get these add-ons cheaper with aftermarket installers.

Used cars also come with extras, but they are usually discounted or even left out in the final pricing. So, if you want a sunroof and bigger rims, there’s a chance you can get them cheap on a used car. New cars smell nice, but is that fragrance worth the extra money? Probably not. Most manufacturers make cars which last at least 100000 kilometers. So, if you find a used car with less than 30000 kilometers on it, looks great and rides smooth, that’s a good deal. You get to enjoy the same luxury as the first owner, but cheaper, and you’ll not lose too much money reselling it.

You might have to give up new car bragging rights with a used car, but that’s a small price to pay. 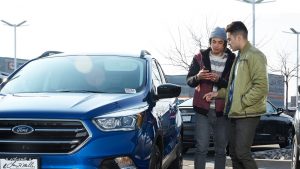